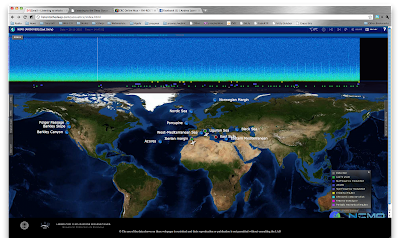 Listening to whales with neutrino telescopes
Whales sing at the same wavelength as the neutrinos emitted by stars. This happy coincidence gave physicists the idea to share their undersea telescopes with marine biologists. By helping the development of a bioaccoustics network to monitor the deep sea environment, they have already enabled the discovery of the unexpected presence of sperm whales in the Mediterranean Sea. It is even possible to listen to the song of whales live from home with a personal computer connected to the web, thanks to the LIDO platform (Listen to the Deep Ocean) : http://listentothedeep.com/
European astroparticle physicists are developing together KM3NeT, a large undersea neutrino telescope in the Mediterranean, dedicated to tracking neutrinos from astronomical sources. The deployment of deep sea neutrino detection lines for current experiments such as Antarès in France, Nemo in Italy and Nestor in Greece has opened up the possibility of also installing monitoring devices for the permanent study of the deep sea environment: studies of ocean currents, of bioluminescence, of fauna and of seismic activity.
Astroparticle physics is a new field mixing both particle physics and astrophysics and offering many new opportunities for environmental disciplines such as oceanography, climate science and studies of the atmosphere, geology…
The ASPERA European network for astroparticle physics and CNRS/IN2P3 invite the media to participate in the workshop « From the Geosphere to the Cosmos » on 1st and 2nd December at the Palais de la Découverte in Paris, where the new synergies and challenges of environmental sciences and astroparticle physics will be presented.
Journalists are very welcome to attend the whole event. A press briefing will be held on the 1st December 16:15 at the Palais de la Découverte in Paris, where the following projects will be presented:
LIDO - for listening to the deep sea environment from home over the internet,
The CLOUD experiment at CERN, which studies the impact of cosmic rays on clouds and climate,
3D-radiography projects for volcanoes, using particle detectors
Probing new territories
Astroparticle physics is an excellent example of interdisciplinarity, combining the research and technologies of both particle physics and astrophysics. Over the last few years, new methods for observing the Universe have been devised. With astroparticle physics, it is no longer a question of simply studying the light that comes from the stars. Rather, the very particles emitted by cosmic bodies can be detected and analysed. Cosmic rays and neutrinos have a whole new story to tell about the violent processes underway in black holes and supernovae. Be it tracking dark matter particles in underground laboratories, or fishing for neutrinos in the ocean’s depths, today’s physicists can appear almost as characters from Jules Verne, modern-day explorers of the wonders of our Universe.
By deploying large infrastructures in unusual places, astroparticle physics offers new opportunities for other scientific disciplines for studying the atmosphere, the ocean, biology in extreme conditions…
Developing new technologies
Astroparticle physics also offers a perspective of extremely promising technologies to come. Just as it is possible to image the human body with X-rays, particle physics detectors should soon be able to make three dimensional images of volcanoes and thus help in better understanding their mechanisms and indeed risk prevention. As they interact very weakly with ordinary matter, some particles such as neutrinos and muons cross huge thicknesses of rock, revealing the densities of the different layers they go through. In addition, geoneutrinos could allow for studies of the Earth’s core.
Better understanding of the atmosphere and climate
Cosmic rays are charged particles that bombard the Earth's atmosphere from outer space. The deployment of large cosmic ray experiments such as the Pierre Auger Observatory in Argentina, or indeed satellite-based experiments, helps to continuously and precisely monitor the atmosphere on a large scale. Such experiments offer the possibility to study the role that cosmic rays could play in triggering lightning in thunderstorms. Moreover, studies suggest that cosmic rays might even have an influence on the amount of cloud cover through the formation of aerosols. CLOUD is an experiment at CERN in Geneva that uses a cloud chamber to study the possible link between cosmic rays and cloud formation. The results could greatly modify our understanding of clouds and climate.