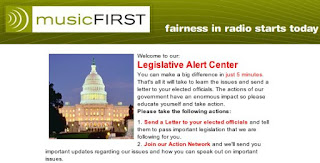 Interview: Mitch Bainwol of the RIAA

As the new Congress is seated and Barack Obama is just days away from swearing in, it seemed like a good time to talk D.C. politics as it relates to the music industry. First up is Mitch Bainwol, chairman and CEO of the Recording Industry Assn. of America, who outlined the org’s issues in the coming year and spoke about the time being right to finally pass a bill that would deliver royalty payments to performers when their songs are played on broadcast radio. Currently only songwriters receive a payment.
“Broadcasters now stick out like a sore thumb,” said Bainwol, who is pictured on the right alongside RIAA president Cary Sherman. “Why should the platform in the greatest position to pay not do so when Pandora (the web radio site) is doing the right thing? That point wasn’t evident 10 years ago. The potential to be a strong unit (fighting for the cause) came together as webcasters, Sirius and XM were paying to reward the creative process. It makes radio look anomalistic.”
The Performance Rights Act, HR4789, was introduced in December 2007 by Sen. Howard Berman (D-Calif.). The MusicFirst coalition has been making it their top priority as has the Recording Academy and the Recording Artists Coalition, which the Academy now oversees. Bainwol lists the other priorities for the organization that, in recent years, is best known as the organization that sues people with illegally obtained music files on their computers.

Q: What do you see as the major initiatives of the RIAA in the new Congress and Barack administration?
A: I place them in four different buckets. The big enchilada, the No. 1 cause of the year, is the performance rights bill. It will receive a substantial focus. It remains an uphill battle but we have been working together with MusicFirst, NARAS, RAC and (other groups) to make inroads on the Hill.
No. 2 is recognizing the reality of the Washington transfer. Every 10 years or so it becomes a unique place — so many people new in their roles. We’ve got to go through and make our voice heard, make sure we’re engaged in education. Our interests (with other music organizations) have converged and it’s a music story we’re talking about rather than a label story.
No. 3 is less Congress-related and more about directly talking with the players, the publishers, the webcasting companies, the cable companies and anyone else involved in the chain of commerce related to music. The mission is to find new models.
The fourth specific mission is working with (Internet service providers) on protecting the integrity of the digital marketplace. They have become the pieces in a very big platform.
It’s not just because of a new president or Congress but because we are living in a time in which there are profound policy questions, very big issues that will demand patience on our part. We’re not in a vacuum. We recognize that there is a lot going on.

Q: The Recording Academy absorbed the Recording Artists Committee which gives the artists’ side a stronger foothold in D.C. While you are on the same side with performance rights, are there places you’ll be foes?
A: We have worked closely with NARAS and RAC and this is something that has manifested in the last year. The current reality is that we are all within the music family and (our goal) is to strengthen very common interests. We’re mostly concerned about digital commerce and working as partners. Merging RAC and NARAS is a good deal that makes sense.

Q: Is there any connection to the ending of lawsuits (against file swappers) to this new coalition of forces? What drove the decision to end the suits?
A: I wouldn’t link them together. NARAS, RAC, unions and managers came together with MusicFirst and the core purpose (of the suits) was served. It’s an example where we all came together, a reflection of that.

Q: The Obama administration is likely to have some familiar faces to the RIAA, chiefly Tom Perrelli for associate attorney general, who has represented the RIAA in lawsuits against individual file sharers. It seems like there would be benefits from having someone so familiar with your operation and mission.
A: Obviously Tom has been nominated for a significant role and we’ll see in the days to come the folks who get selected. It’s a very vigorous process. He has the qualifications and the competency.

Q: Back to issue No. 1. What has been the roadblock to the performance rights bill?
A: It’s been a battle for decades. It comes down to the broadcasters being very strong, but less so in the last 20 years due to the fragmentation of the media. They were the media when music had to go through radio and TV to get a message out. Secondly we had a bunch of issues, not necessarily bunched together. There’s a convergence here, a rally for this cause like I’ve never seen. Everyone has done a very good job getting the word out on the Hill. We’ve been putting points on the board.

Q: It seems strange that this is not an issue internationally and that it’s a case that is strictly American.
A: But that has not been a compelling reason. We’ve been in a position to change, but one side is there defending the status quo. And in D.C., making change is always tougher than keeping things the way they are. Now we’re saying ‘Yes we can.’ It’s a perfect time.

Q: You’re staging a ball to raise money for Feeding America and Rihanna will be the headliner. We don’t hear much about performers getting to D.C. on behalf of the RIAA or for related efforts. Is that a secret weapon of sorts or does it not happen often?
A: The ball is a terrific opportunity to expose Washington to creators of music. We do as much as we can to present the brilliance of artists. In Denver and Minneapolis we made the case that creativity is important. This event is a unique moment.

Q: We’re getting a president who has been vocal about his appreciation of music, which we haven’t had since Clinton was such a music advocate.
A: I beg to differ but every president in history has loved music. It touches everyone’s soul, our unique language.

Q: But some, such as President-elect Obama, are a bit more literate when it comes to that language.
A: This is a very young and hip, culturally aware president.

It seems these days that Washington, D.C. is where the action is, where the decisions are being made that will hopefully snap us out of this economic storm that has been raging for months now. It’s a story that gets played out nightly on your news channel of choice.
There is another battle that will be played out in Washington in the coming weeks and months, although it may not receive the front page treatment. But for you and for me, it is a battle that is as important as any other we are facing today.
The Performance Tax has once again reared its ugly head and the RIAA and its allies are preparing to introduce legislation in Congress that could, realistically, cost the radio industry between $400 million and $7 billion per year.
There will be claims that this is a question of fairness and the money is needed to help recording artists. The fact is that the record companies – not individual artists – will be the primary beneficiaries of a performance tax on radio. The same companies who denied, resisted and ultimately blew their business in the transition to digital delivery now want to dig into the pockets of radio to save their skins.
For the past 80 years, the relationship between the music industry and radio has been mutually profitable for both industries, providing limitless on-air promotional exposure of artists’ music at absolutely no cost. Radio has profited as well with access to great recorded musical content and we have been a willing partner in creating highly profitable careers for a long roster of artists in all music genres. Radio has been and continues to be the prime driver that puts people in concert seats and motivates them to buy music, whether it is at iTunes, Amazon or a brick and mortar store. Radio will continue to be the best possible channel for widespread distribution of music in a cost-effective and profitable fashion for some time to come.
Right now, with a new Congress in Washington and a new administration taking over, the RIAA has undertaken a major new push to upset this bargain and strike a new, more favorable one for themselves – one in which radio pays a high price for the “privilege” of promoting the recording industry to our listeners – and they intend to use the legislative process to do so.
For each of us who are working daily in radio, this is a direct economic threat that can be more damaging to our future than anything the economy has handed us so far. A direct tax on radio’s already-suffering profitability would force a wholesale rethinking of our station’s formats, our staffing, our ability to contribute to our communities, and how we run our business. It is a disruption that should never be considered, especially in this time of economic uncertainty.
We cannot assume that someone in Washington is going to ride to our aid; no industry group can fight this battle by itself. It is going to take personal involvement by each of us, regardless of our job title, to let our local representatives in Congress know just how important it is to stop this ill-advised legislation. Take a moment today to write or call your Congressional Representative’s office. Ask them to co-sponsor the “Local Radio Freedom Act” (H. Con. Res. 244), which is being introduced in the US House of Representatives. Tell them what it means for your industry, your job, your future. For more specific background information, or to check and see who your local representative is, click here.
The radio industry is actively working to meet the challenges presented to it by the digital age and the economic downturn. We cannot and should not have to deal with a legislative mandate that would turn our business upside down. I will continue to keep you up to date on this battle as it unfolds in the months to come. Please pitch in if you care about the future of this industry.